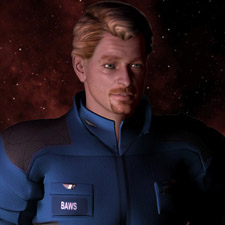 Graduated the Space Force Officer Candidate School program in 2658 and assigned to the Waging Wasps Squadron onboard the TCS Kyoto on his first tour of duty. Kettle flew a Hornet fighter throughout the several failed campaigns by ConFleet to take the Enigma Sector. Transitioned to the Epee fighter in 2661, and spent three more years onboard the Kyoto till the day she went down in the Battle of the Enigma Black Hole.

After recovering from injuries sustained during the loss of the Kyoto, Captain Baws was then assigned to the TCS Gibraltar. She served with her well, and survived the loss of the Gibraltar when Prince Thrakhath’s forces annihilated the Confederate 6th Fleet in the Deneb Disaster. He was then assigned over to the TCS Wolfhound, and was decorated during several intense fleet actions. He was promoted to Major; not soon afterwards, he led an Epee squadron against the Imperial Home Fleet during the Battle of Vukar Tag. Upon the completion of this tour, he is assigned to the training carrier Wellington as a flight instructor.

Major Baws is a combat veteran who has Been There Done That; and sometimes has a dual personality. He is mostly easy-going at first, but is rather impatient and tends to get angry easily, hence his callsign “Kettle”. He recently has been taking private anger management courses to hone in his temper; something that is essential when one is assigned a squadron of rookies to train.

After his instructor tour on the Wellington comes to an abrupt end, Major Baws is rotated back to the front line as a combat pilot and squadron commander.